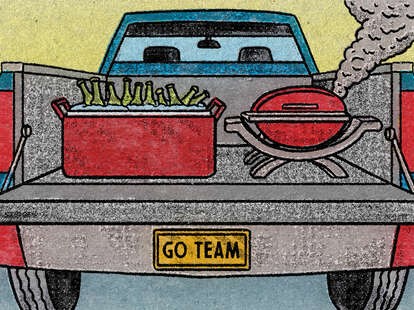 Top 5 trucks for tailgating the 2021 season and beyond

Football season is underway, and I know by now you’re ready to get out there and be the life of the tailgate and represent your team like never before! If that sounds like you, I have great news, here are my top 5 tailgating trucks to take your party to the next level, without further ado; let’s get into it.

When it comes to trucks there is one thing they typically lack that could be useful at a tailgate…a trunk space!

For day to day it is perfect for an extra space to lock away valuables without taking up room in the cab, then come game-day it can be used as a cooler for your food and beverages of choice, your cooking utensils, plates, cups, you name it – it stores it!

We all know there is never enough space for all your stuff, but it’s good to know that when it’s all been used up, the trunk doubles as a makeshift trash can to clean up after a good party. Also worthy of noting is that the tailgate is double-hinged, meaning that it opens in the ‘conventional’ manner, but also can swing open like a door making it much easier to get up closer to the main part of the bed, very thoughtful indeed.

Next up is the Ram 1500, this time the tailgate opens as a 60/40 barn door setup, swinging out to each side of the truck bed. This allows you to open 1 side, both sides, or neither at any given time, which in tight spaces would come in very handy. The 1500 also has built-in storage, although I would argue it is a little cooler than that of the Ridgeline, as it is built into the side rails which makes great use of the previously unused space.

Credit is due to the guys at Ram as the 1500 TRX won MotorTrend Truck of the Year 2021, the third year in a row that Ram has taken the title, so you know you’re getting a quality vehicle in the 1500.

Maybe when it comes to repping your team you subscribe to ‘bigger is better’; and if that’s the case they don’t get much bigger than the F-450. Being one of the largest and loudest vehicles at the tailgate is one thing but the F-450 doesn’t stop there, it may be a brute but it is aware of it, Ford conveniently added a pull-out/fold-down step and grab bar to make climbing up in the truck bed a whole lot easier. Unfortunately, that’s about where the innovation ends on this one, but when you’re pulling up to the game in this beast do you really care?!

Standard on almost all trim levels for the Sierra is their quite impressive and award-winning MultiPro Tailgate, which crams about as much as possible into what was once seen as ‘just a tailgate’ for a truck. The MultiPro is touted as a 6 function tailgate, and that it is, but in terms of how useful it is at a tailgate, we are looking at two functions in particular. The first is the full-width step which works similar to Ford’s but it is much more robust and comes with the grab handle also, making access easy-peasy for people to climb up for better viewing or a seat on the side rail!

The second is the ‘work surface’ configuration. But we’re at a tailgate so you know we’re not working, however; having a nice flat and level surface around bar height makes for the perfect place to rest your food and drink so you can feel more at home.

This one is for the chef, and by the chef, I mean the person who ends up cooking EVERYTHING! The hybrid model F-150 features Ford’s PowerBoost technology which essentially means you can drive around with an onboard generator. This of course lends itself to being able to power a multitude of devices to cook up a storm be it a hotplate, a blender, a coffee pot, you name it you can more than likely run it, just maybe not everything all at once!

A side note is that while good for cooking it could also be used for lighting if the tailgate runs on a little late and the party is not ready to end, 3 cheers for late-night gatherings with friends!!

While there are plenty of trucks out there and most, if not all will certainly do the job at your next tailgate, these are just a few that might make it extra special in my opinion.

I would love to hear your opinion on these trucks and any others you think deserve to be considered and what do you wish was a feature that we haven’t seen on a truck yet?